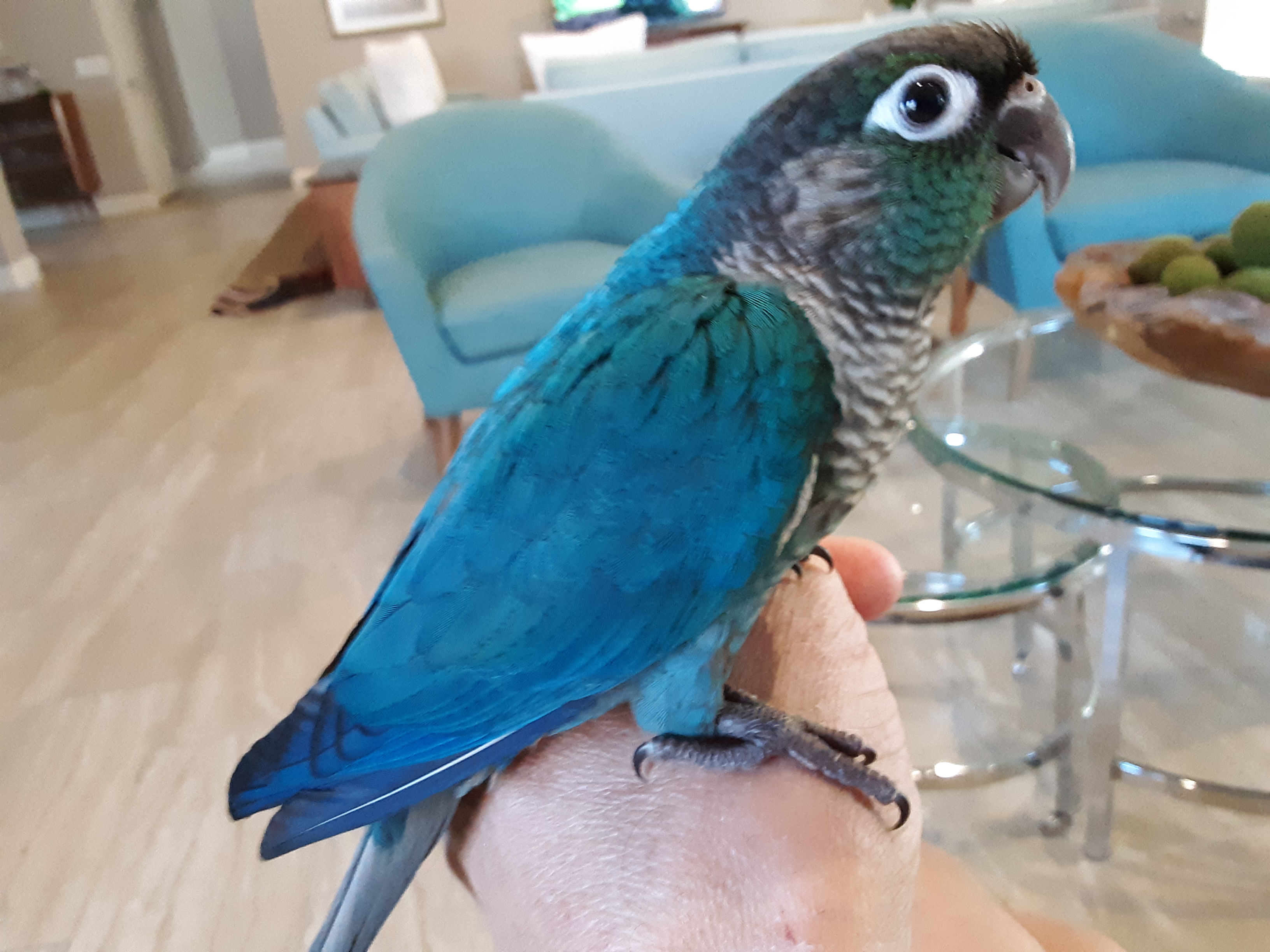 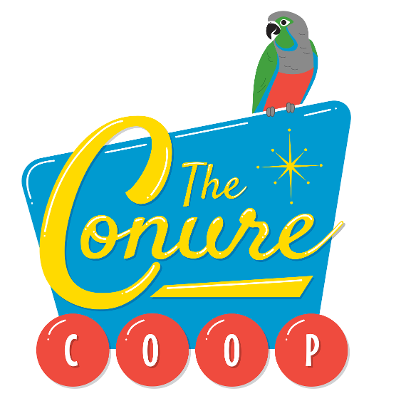 The Conure Coop is a small home based company that began out of loving one bird just a bit too much, his name was Rio and he is on our logo. We felt Rio was lonely even though we spent all of our time with him, training him and playing with him, so like any good parents we went out and bought Rio a Pineapple Green Cheek and they fell in love at first sight. From that first day they were never apart. We adopted an African Grey named Willy on December 29th who was not being cared for well. At first he was a little standoffish but he soon bonded with Brian and has become one of the most wonderful additions to our family we've ever had. He talks up a storm and loves to play under the sheets before bedtime, his vocabulary is amazing and he actually asks you questions like if you are down on the floor "He says "What are you doing down there?" or if you have a glass with ice in it he says "Is that cold?" then he takes a sip of the water and says, "Oh, thats is cold." We have hundreds of these stories and one day I'll write a section about Willy.

From these three simple feathered children we bought two more Conures that needed a home, then two more and so on and so on. To our great sadness we lost Rio to a toxicity issue on thanksgiving of last year, a story we will save for another time but that is important to tell. Our beloved boy will always be in our hearts and that is why he is on our logo. We now have 6 pairs of conures that we began to breed about six months ago and to our surprise we realized that we loved having these babies and raising them to become great pets for other people. We wanted others to know that a bird can give joy and love and surprise you with their intelligence. We hand raise all of our babies and hand feed them right up to weaning. 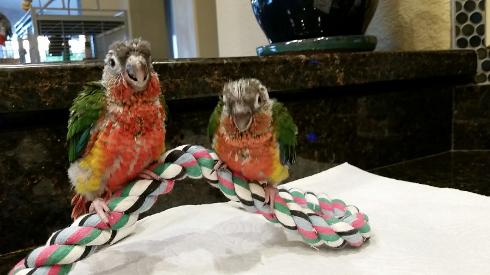 The reason we do this is so that when they open their eyes we are the first things they see and they bond right away with humans. As soon as they are old enough we begin their training to step up, potty training and to fly to our fingers although we do trim their wings before they go home with their new families that way they can still fly a few feet but are not in  danger of flying away or flying into a window and harming themselves. 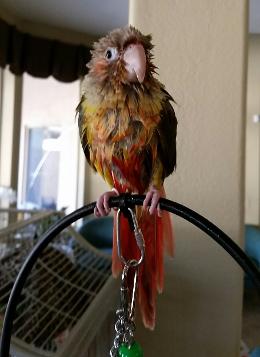 Before they go to their new families they are already on the way to being the perfect pet. This is just a little about us and our love for our birds. We are planning on expanding our family to include many different species, we currently have Yellow Sided High Reds, Crimson Bellied, Turquoise, Pineapple High Reds, Yellow Sided Turquoise and will be expanding once we move to our new home and into our new bird house. We raise all of our birds indoors with full spectrum lighting that mimics the sun and they live on a diet of freshly chopped veggies and fruit every day, pellets and a super mix of seed in small amounts. They also get apples and Roudy Bush High Energy. We limit the amount of their food so that we maintain healthy birds and although our numbers are increasing we still have daily playtime with all of them.

Tinkerbell and Peter Pan
A story

This is Tinkerbell and Peter Pan two of our first pairs and also our first ever parents. We had just started buying birds as pets and these two just fell in love at first sight. They soon became inseparable and we put them in the same cage to play. One day I noticed Tinks belly swelling I thought she was sick but came to find out that Tinkerbell and Peter had been playing a bit too much so we added a nest box and soon she began laying eggs. She laid four beautiful white little eggs and we had no idea what to do or how to proceed so we read and studied everything we could get our hands on about breeding and egg care. We also asked a few breeders what was the best way for us to raise these babies and every one of them told us something different so we went with our gut instincts of love, love and more love.

For us everything just felt right and although nervous that we would make a mistake, had no problems. Tinkerbell was a wonderful mother and Peter was an incredible father both remained loving pets during the whole process which we were told they would not. The pictures below give you a history of our first four babies that led us to fall in love with conures and soon we began The Conure Coop with our first ten pair of birds. Like other bird lovers who choose to have babies we pulled our young at two weeks old so that when they open their eyes they bond with us instead of their mother. It sounds terrible but is actually less strain on the mother to not have to feed and care for them twenty four seven, instead she can take a rest.

We then feed the babies by hand every 3-4 hours until they are weened. During that time when they are old enough we start their potty training, flight training, and step up training. We work with them every day until they are comfortable enough to lay upside down in our hands, come to us when we call them and don't bite! The four beauties she gave us are now scattered all over the US but fortunately their new families write to us all the time and share their joy and adventures.

Have a look at some photos of Tinkerbell and Peter below!